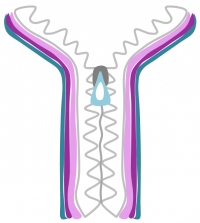 On 6 September last the CJEU definitively refused registration as an EUTM for the signature zip-bordering tri-colour stripes (in the Pantone yellow, orange and navy blue variation) of K-Way windbreaker jackets. The Court dismissed a petition submitted by Basic Net S.p.A., holder –inter alia– of the well-known K-Way trademark, thus confirming the EUIPO’s decision to refuse registration for the figurative trademark composed of said stripes.

Under the EU Trademark Regulation (Regulation (EU) 2017/1001) an EU trademark may consist of simple shapes, colours and combinations of colours provided they confer distinctive character on the goods or services of an undertaking, distinguishing them from the goods or services of other undertakings and, therefore, that they perform a trademark’s essential function of indicating origin. This condition becomes particularly insidious in relation to figurative trademarks. Settled case law deems that, should such trademarks be composed of one or more excessively simple elements – such as a basic geometrical line or colours – , distinctive character must be proven by means of demonstrating their presence and use on the market, such signs not generally being perceived by the public as trademarks proper.

Basic Net S.p.a. deployed this argument in the lengthy series of actions brought by way of protecting its figurative trademark, countering the position of the EU Offices and Courts which decided that the K-Way trademark was devoid of distinctive character, holding it to be an ornamental feature or, in any case, a design frequently used in the world of fashion and as such solely able to transmit an aesthetic message. Absent any acknowledgement of intrinsic distinctive character, Basic Net then argued the existence of secondary meaning, submitting several pieces of evidence, such as sales turnover, advertising investment and various press reviews on the goods bearing the tri-colour stripesby way of proving that the stripes are well-known and impressed upon the public mind throughout the EU as being part of the K-Way world.

However, neither the General Court (EU) nor the CJEU ruled that this evidence was sufficient to prove public perception throughout the EU of the trademark as indicating commercial origin. The CJEU concurred with the opinion of the General Court whereby the sign had acquired distinctive character in 4 (out of 27) EU Member States which, albeit constituting a significant part of the EU (estimated to be around 40%), did not constitute a sufficiently large part thereof. It was observed, in particular, that the sales and investment data as such did not demonstrate that the target public perceived the trademark as an indicator of origin but “solely” proved its position on the market.

The Court confirmed that, to the extent to which the contested trademark was considered to be devoid of distinctive character ab origine throughout the EU, although evidence of the acquisition of distinctive character following use is not required, for the purposes of registration, for each EU Member State, it must in any case demonstrate such acquisition in all EU Member States and not only in some. The submitted evidence in the case in question, assessed as a whole was not considered sufficient for the purposes of demonstrating that the trademark had acquired distinctive character following use such as to justify its registration.

These decisions on the K-Way stripes form part of a recent trend of the EU Offices of taking a rigorous stance on assessing the suitability for protection as a trademark of an originally intrinsically weak sign. However, the means by which acquisition of secondary meaning, which valorises the public’s perception of a sign, may be demonstrated still remains to be clarified.

Tweet
More in this category: « DAZN, “Where and When you Want ”Streaming: Competition Authority Sanctions for Misleading Advertising Rights related to copyright infringement on the Internet and competent court: Attorney General EU proposes a criterion for identifying the damage "delocalized" »
back to top