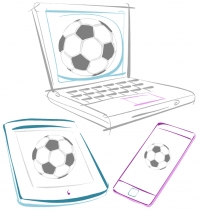 DAZN, “Where and When you Want ”Streaming: Competition Authority Sanctions for Misleading Advertising

With decision no. 27593 of 20 March last the Italian Competition Authority closed the investigation launched in August 2018, sanctioning Perform Investment Limited and Perform Media Services S.r.l., companies which market multimedia content under the brand name DAZN, for two unfair commercial practices employed in promoting the DAZN streaming service offer for the 2018/2019 Serie A and Serie B season.

DAZN, a division of the Perfom Group, began to make itself known on the Italian market by the substantial investment it made in acquiring live broadcasting rights for a number of Serie A and Serie B matches of the Italian football championship for 2018/2021, offering users the chance to see this content by means of  live streaming and on demand.

The Competition Authority found that use of the claim “Where and When you Want ” on the home page of the website dedicated to the service and in the TV commercial broadcast in July 2018, highlighting the possibility of using the streaming service wherever and whenever without mentioning the technical limitations which could make use of the offered content difficult or actually impossible, as demonstrated by the problems encountered by users upon availing themselves of the service for the first time at the beginning of the football season, was misleading, under Article 21 of the Consumers’ Code.

According to the Competition Authority, the claim made out that the content of the streaming service could be viewed very easily, wherever the user was and whenever. It ruled out the possibility of the claim being an “exaggerated” or “hyperbolic” expression such as to merely exhalt the attractiveness of the product or service offered. On the contrary, the claim draws the attention of consumers to what appear to be real characteristics of the service, thus making them take a commercial decision which they would otherwise not have taken.

This finding of the Competition Authority must therefore be taken into account in promotional campaigns for services available on mobile devices should there be an intention to emphasise the possibility of users taking advantage of such services wherever and whenever.

The Competition Authority also found another commercial practice to be unfair. This too contravened Article 21 of the Consumers’ Code relating toinformation given to consumers for the purposes of signing up to the DAZN service through the dedicated website. The user was given a month’s free trial upon registration with the  DAZN service, it being expressly stated that creation of an access profile would in no way give rise to a contract (“There is no contract. You can cancel whenever you like”). In actual fact, however, as emerged from evidence examined in the investigation, creation of an account led to  conclusion of a service contract which, absent cancelation, resulted in the automatic debiting of the monthly fee.

The Authority issued administrative sanctions for these unfair commercial practices amounting to a total of 500 thousand Euro (260 thousand for the first practice and  240.000 for the second).

Tweet
More in this category: « Resale Right Royalty: Who Pays? For the CJEU it does not matter whether it is the seller or the buyer as long as it is paid EUTM registration refused for K-Way coloured stripes: the difficulty in proving secondary meaning »
back to top