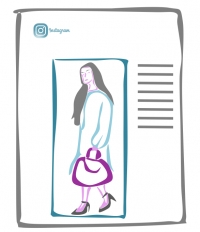 Copyright, Photographs and Instagram: Narcissus comes to grips with the rights of photographers

Copyright law has once again clashed with the habit of publishing photographs on social networks. According to the media (and IPKat, which commented upon the matter), the latest celebrity toend up in the eye of the storm is popstar Ariana Grande. Shethus joins other celebrities, such as Gigi Hadid, accused of copyright infringement for publishing photographs of themselves on Instagram account without the permission of the photographer.

In the action brought before the Court for the Southern District of New York, the photographer Robert Barbera alleged that the singer had contravened Title 17 of the US Copyright Act by posting two photographs taken by him without his permission and without indicating his identity, intentionally infringing his copyright. The photographs at suit show the singer with a bag bearing the writing “Sweetener”, the title of her latest album, accompanied by a caption containing an express reference to the album.

If such conduct were to be examined pursuant to Italian law, which rights could be enforced by a photographer who sees a photograph of a celebrity shot by him/her in a public place,while exercising his/her activity of “paparazzo”, published on the social profile of said celebrity?

The photograph of a famous person taken by a “paparazzo” cannot, however, be freely reproduced by third parties, including the person portrayed therein, if the photographic workcomes under Article 2 no. 7 Copyright Law, or is a simple photograph, i.e. an image “of persons or of aspects, elements orevents in naturalor social life”, without creative character but displaying personal activity on the part of the photographer, at least in searching for the subject to be photographed (and protected, to a more limited extent, under Articles 87 ff. Copyright Law, as related rights). In most cases photographs taken by reportersand paparazzi belong to the category of simple photographs. A photographer has the right to reproduce and circulate such photographs (if they are not commissioned), provided they bear the name of the photographer and the date on which they were  taken. If this information is not provided, their reproduction is not considered unlawful unless the photographer proves that the reproducer acted in bad faith.

The availability of myriad photographs online, particularly on social networks, means that there is now a widespread conviction that online images may be freely reproduced. This is what Arianna Grande seems to have thought when she reposted on her Instagram profile a photograph portraying her which she had found online. But what about the rights of the paparazzo?

There are many other questions to be answered in cases similar to that of Arianna Grande – such as whether publication of a photograph on a social media website by a celebrity or influencer may, in no circumstance, ever be considered private use pursuant to article 19 Copyright Law, where there is “promiscuous” use of the profile. We shall simply have to wait for the first Italian case.

Tweet
More in this category: « Requirements for format protection: Soccer “Oscars” Repeated copying of protected online content: changing the domain name is not enough »
back to top