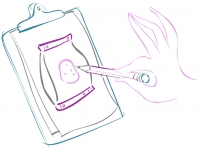 The recent decision of the Tribunal of Milan - section specialised in imprenditorial matter (n.11010/2014 published on the 27th of September 2014), once again addressed the lookalike issue, a competitor’s mimicking of the features of a product’s packaging. San Carlo Gruppo Alimentare S.p.A. notorious producer of crisps, had sued Amica Chips S.p.A. (another well known producer of crisps), affirming that Amica Chips had used crisp packaging similar to that used by San Carlo. The San Carlo confection is characterised by a white background, an image of the crisp-product in centre, description of the product in minimal characters, name brand in centre top and horizontal coloured edges (white and red). The Amica Chips confection is white and light blue, has thicker vertical coloured edges with bolder colours, lucid material, two chips in the centre of the package and the Amica Chips brand well in evidence.

First and foremost the judges did recognise the distinctive feature the San Carlo packaging had, since it differs from the graphics commonly used in other crisp confections; However, they stated that there was no risk of consumers confusing the two products, thus excluding any hypothesis of counterfeiting. The judges - and this is the most important aspect of their decision - did recognise the lookalike practice. Excluding the risk of confusion, they affirmed that the imitation of particular or distinctive features of the San Carlo packaging can be considered unfair competition (art. 2598.2 of the Italian Civil Code). Specifically, the appropriation of the qualities of the products or the enterprise of the competitor does not induce consumer confusion (in other words, a consumer will not confuse a pack of Amica Chips for a pack of San Carlo) but it is finalised to making the consumer mentally recall the competitor’s product, influencing the consumer’s choice of whether or not to buy a product. The judges recognised hat the lookalike phenomenon consists in the imitation of the whole of the elements that compose a confection and of what appears on the outside.

The Tribunal of Milan’s decision consolidates the orientation for which

b) A competitor’s slavish imitation of the complex of its elements is illegitimate, whether the products could be confused or not (on the contrary the brand name is often emphasised in cases of ‘LOOKALIKE’, and there is no risk of confusion)

To obtain adequate protection of the sustained investments it is fundamental that the combination of the single features of a package be distinctive, and it must differ from other common elements in its field. The packaging and layout of a product can therefore be compared to a company’s traditional IP assets, usually represented by registered trademarks or designs.