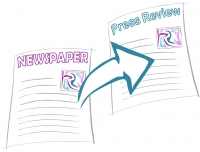 The Court of Rome deems lawful the reproduction into press releases of articles, information and news that have already been published in newspapers and periodicals

After several important decisions were passed at the end of the last century, including the case ruled over by the Court of Milan on July 13, 2000, the judges have come to decide once again over a case regarding the theme of copyright and press releases.

With the sentence passed on January 18, 2017, the Court of Rome has declared  the claims of Data Stampa S.r.l. and Eco della Stampa S.p.A. well founded and stated that the reproduction of articles, information and news already published in newspapers and periodicals into press releases for exclusive use by clients does not constitute a breach of rights of newspaper publishers.

According to the Court of Rome, in the case of press releases (such as this case), Articles 65 and 101 of  Law n. 633/1941, as amended (“Italian Copyright Law”), cannot be applied. Such provisions were invoked by the Italian Federation of Newspaper Publishers (FIEG) and Promopress 2000 S.r.l. (on their own as well as acting as agents for several newspapers)in order to claim copyright protection of the  content of articles, including those that allow for reproduction without the consent of the rightholders within well-defined limits and scope.

In particular, the Court of Rome stated that Articles 65 and 101 of the Italian Copyright Law cannot be applied to press releases, highlighting the competitive nature of such provisions, aimed at penalizing parasitic behaviors and countering any possible abuses and unlawful actions.  Moreover, the Court stated that it is “indisputable that the majority, if not all articles utilized in press releases, are printed news and information that surely cannot be protected by copyright law” since they tend to lack the necessary requirements of creativity and originality, unless proven otherwise by those who invoke copyright protection.

After acknowledging the complexity of the subject, the Court of Rome nevertheless advocated for legislative intervention that would take into consideration the subjects and interests of the stakeholders involved.

The sentence constitutes an important legal precedent in this matter between newspaper publishers and companies that provide press releases and represents an interesting reference and contribution regarding the limits of copyright protection for articles and magazines.

Please note that the terms for the appeal have not yet expired and the decision of the first instance may be changed depending on the outcome of the court of second instance.

Tweet
More in this category: « Prohibiting the sexual portrayal or sexual representation of under-18s in the UK: the new ASA rules come into force Work-made-for hire and copyright ownership: a recent decision of the Italian Court of Cassation »
back to top