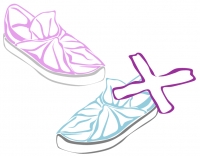 A few months after the previous order of April 22, 2016, the Specialized Section of the Court of Milan ruled over a case regarding legal protection of the “ribbon or knot” affixed on the upper part of a pair of shoes, recognizing once again the nature of the individualizing element protected by rules of unfair competition according to article 2598 n. 1 of the Italian Civil Code.

The ruling of the Milanese court arrived at the conclusion of a preliminary proceedings which involved an Italian company specializing in the production of high-end footwear and two foreign competitors.  In this case, the Italian company claimed that there was an act of counterfeiting where these foreign competitors had illegally imitated the “ribbon or knot” that characterizes the upper of one of its models of shoes.

In this case, since no specific intellectual property rights were involved, the behavior of the company’s competitor was evaluated solely under terms of unfair competition.

The Court made reference to the generally accepted principle according to which the imitation of shapes of a product necessary to reach a certain result is not impeded, meanwhile the reproduction of arbitrary distinctive elements not essential for any technical function represent an act of unfair competition, if this act causes likelihood of confusion in relation to the entrepreneurial origin of the product.  The Court of Milan recognized the characteristic element of the “ribbon or knot,” claiming that the latter “constitutes an exterior and original characteristic that is not conditioned by the function and thus destined to have a distinctive capacity as it is through this element that the consumer associates the product to a particular company.”

In addition to the individualizing element, the Court also identified in the “ribbon or knot” a distinctive character provided by the feedback of the market with respect to the new “shape,” concluding that the defendant’s shoe model “reproduces the individualizing element of the claimant’s product in a substantially identical manner”, generating the same general impression within the consumer.  The Court stated moreover that, after all, “the shape of the ribbon is identical to that of the claimant’s shoe if we consider the position where it is affixed to the shoe (on the upper), the size of the ribbon (since it covers so much of the shoe that it seems to become part of the upper) as well as the shape itself of the ribbon (being in a vertical orientation that follows the length of the upper).”

In light of the arguments presented, the Court stated that the behavior of the defendant is an act of unfair competition for slavish imitation pursuant to article 2598 n. 1. of the Italian Civil Code.

This order of the Court of Milan is a recent example of “provisional and supplementary” application of the rules of unfair competition, that in absence of specific, intellectual property rights to be enforeced, allow for the protection of individualizing elements, which may also be part of the product’s shape and the result of business investments.

It is also interesting to note why the Court upheld the request of publication regarding both the header and the ruling of the preliminary ordinance limited to the home page of the defendant’s website, to a newspaper with nationwide coverage and to a magazine specializing in the sector, by the claimant’s choosing.  According to the Court these publications will clarify how the preliminary measure “does not aim to simply achieve a remedial and sanctioning effect (which is typical of this type of decision); however, it aims to strengthen the inhibitory preliminary measures which are part of the decision; for the rest, we must consider the persistence of imitative forms of footwear (belonging to the claimant) on the market and therefore, also be aware of the balance in opposing interests.  Furthermore, it would be beneficial to also adopt this preliminary measure to act as a deterrent.”

Tweet
More in this category: « Requirements for format protection: Soccer “Oscars” European Parliament to vote on the Copyright Directive on the “LinkTax” and the “Value Gap” »
back to top